Powerhouse Company, in collaboration with landscape architecture firm DELVA, has unveiled the design of a new visitor center for the Koekamp, ​​which will play a vital role as the gateway to the new Hollandse Duinen National Park . This intervention will open part of Keokamp, ​​a green expanse near The Hague Central Station, to the public. The visitor center, commissioned by the Dutch Forestry Commission, is expected to be completed in 2024. 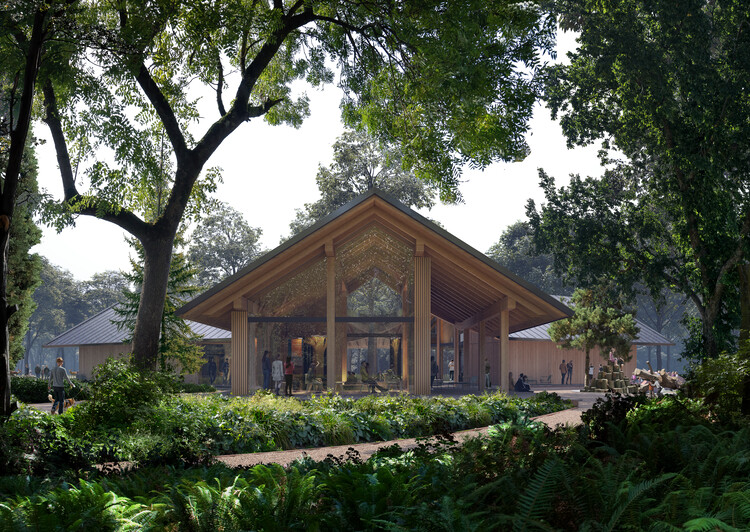 The area known as Keokamp is a large patch of land that survived medieval times: a cattle field turned into a deer park when Philip the Good brought the first deer there. It has been a public park since the beginning of the 17e century. Later it was partly landscaped in the style of English country houses by the 19th century landscape architect Jan David Zocher. Nowadays it is mostly fenced off, closed to the public, but preserving its biodiversity, with large populations of deer and storks living there.

A city-wide project hopes to integrate Keokamp, ​​strengthen its links with the city center and the station, and include other green spaces in The Hague and beyond, including the Malieveld, Haagse Bos and the many kilometers of sand dunes along the coast. . These areas will come together under the aegis of a new national park, Hollandse Duinen Park. The Visitor Center will play a central role in opening up these spaces to the public and inviting visitors to explore them. In addition to the existing entrance on the east side of the site, there will be an entrance in the form of a pedestrian bridge on the north side.

We wanted to create an entrance that was not just a building but a landscape. The balance between the architecture, the program and the design of the park is essential here. Our inspiration was the past. Instead of repeating history, we lovingly adapt it and put it back together with respect for nature and in the design spirit of landscape architect Zocher. – Steven Delva, DELVA Landscape Architecture and Urban Planning

The natural landscape informs the design of the new visitor center that surrounds it. The three houses, connected by a three-winged roof, are positioned between the tree trunks. By weaving the architecture with the landscape, a central circular courtyard is created, an informal outdoor meeting space with room for various activities. The first two public wings house an information center to the south, where visitors can learn about the landscape and its long history, and a restaurant to the north. The third wing houses the offices of the forestry commission, allowing visitors to see and understand some of the work of the foresters.

The buildings are constructed entirely of wood and glass. This combination of facade materials, 50% wood and 50% glass, offers the most appreciable energy efficiency. The trio of structures rest on a floating wooden platform, surrounded by a looping pattern of paths evoking the organic pathways characteristic of Zocher’s work.

This is not the first collaboration between Powerhouse Company and the landscape architecture and urban planning firm DELVA. Some of their other projects include the IMB headquarters and waterside work and living complex in Amsterdam, the renovation of the Rotterdam Central Library and the winning proposal of a competition for “Urban Woodland ” in the Nederlands.

Military Veterans Gold Star Family Pass (NPS/J.Ferracane) Free Veterans Day PLUS a new free pass! Entrance fees are waived for everyone at all paid national parks on Friday, November 11 to honor Americans who have served our country. Additionally, a new Interagency Lifetime Pass for Veterans and Gold Star Family will be available beginning on […]

[ad_1] A new problem is emerging inside the country’s most famous wildlife conservation area, Chitwan National Park. It is an invasive weed – parthenium. The invasive weed is spreading at an alarming rate to different parts of the park and if not controlled in time it should be a cause for concern to wildlife. Conservation […]