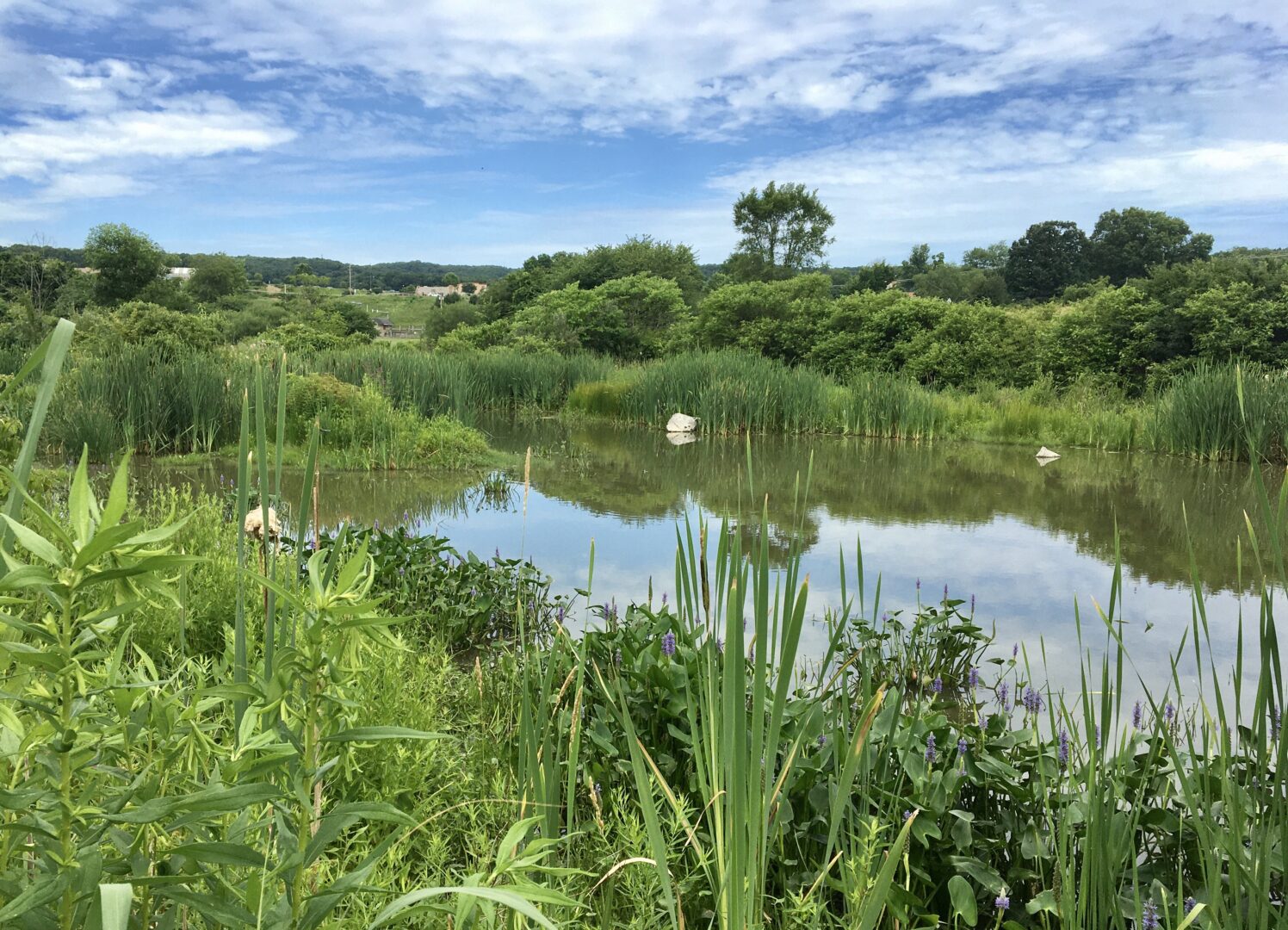 Turtles can occasionally be found sitting on the rocks at this seasonal pool at the Old Crow Wetland in Smithfield Township, Huntingdon County.

On the side of a stretch of Route 22 in central Pennsylvania is a modest sign for a “wildlife viewing area.” It’s in a gravelled parking lot, crumbling in places, and would be easy to miss as trucks and cars zoom past. 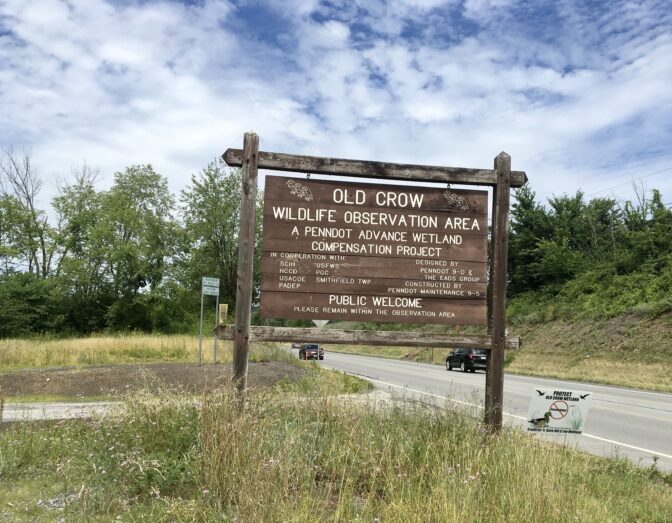 A sign for the Old Crow Wildlife Viewing Area next to Route 22 in Huntingdon County.

But, after a short walk through the lot and down a path, a lush landscape teeming with wildlife emerges.

“We’re passing a beautiful catalpa and goldenrod coming up,” Claire Holzner of Huntingdon said on a hot July day. “And there’s a pollinator garden on the left that’s been planted by volunteers and people who’ve worked here for years, which is really beautiful. When we get to the pavilion, we can see the water. And usually you can see and hear a lot of different birds here. It’s just a beautiful place.

Holzner was on a tour of the Old Crow Wildlife Viewing Area, near the intersection of Routes 22 and 26 in Smithfield Township, Huntingdon County. It was created in 1997 by PennDOT as a mitigation project. Ornithologists and naturalists say the project is a success. But this patch of greenery might have a new neighbor – a gas station and a truck stop. A group is trying to stop this, saying the 24-hour operation could harm wetlands.

“It’s a little oasis in a very built-up area,” said Holzner, one of the founders of the Coalition to Save Old Crow Wetland. 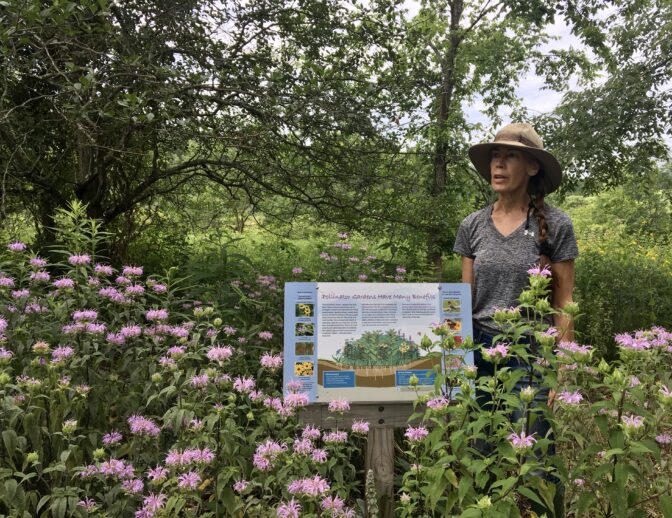 Chris Shook, a conservation forester who recently retired from the U.S. Department of Agriculture’s Natural Resources Conservation Service in Huntingdon County, stands in the purple lemon balm that is part of the wetland’s pollinator gardens of Old Crow. Around 500 plants of 30 species have been planted on the site.

The group says the site, with its marshes and wildlife, could be compromised by the gas station and convenience store York-based Rutter’s wants to build next door.

“It’s the worst possible location for a truck stop right next to a very delicate fragile ecosystem,” Holzner said. “Rutter’s has the option of finding another location. It’s up to them to decide. 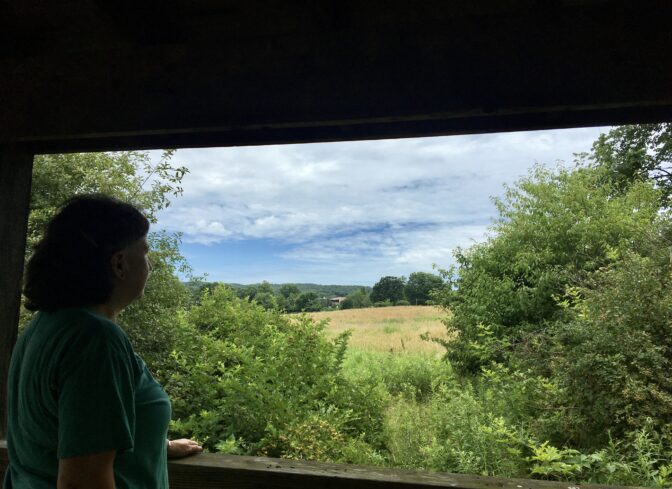 Claire Holzner looks from the Old Crow Wetland Lookout Lodge in Smithfield Township, Huntingdon County, to the area where Rutter would like to build a gas station and convenience store. Holzner, part of the Coalition to Save Old Crow Wetland, says the Rutters would mean light and noise pollution, as well as the possibility of contaminated runoff, for the wetland ecosystem.

Besides the potential for water runoff, there are concerns about the impact of nighttime light pollution, litter, invasive species, and even road salt. Opponents say the proposed Rutter would not just be a convenience store, but a large truck stop with underground fuel storage.

A spokesperson for the York-based channel said the company was not discussing the status of ongoing projects.

Smithfield Township Code Enforcement Officer Ed Habbershon said supervisors would not vote on the plan until other agencies, including the state Department of Environmental Protection, wouldn’t approve of it. Habbershon said the process needs to happen.

“How fair would it be on Rutter’s side if we didn’t let them follow their due process?” he said.

Huntingdon area residents and bird watchers Deb and Greg Grove enjoy visiting Old Crow Marsh for bird watching. They have a spotting scope set up the day they are there with other opponents of the proposed Rutter.

“There’s a green heron sitting here if you want to look at it…it’s sitting on a rock,” Deb Grove said, giving a reporter a peek through the scope. 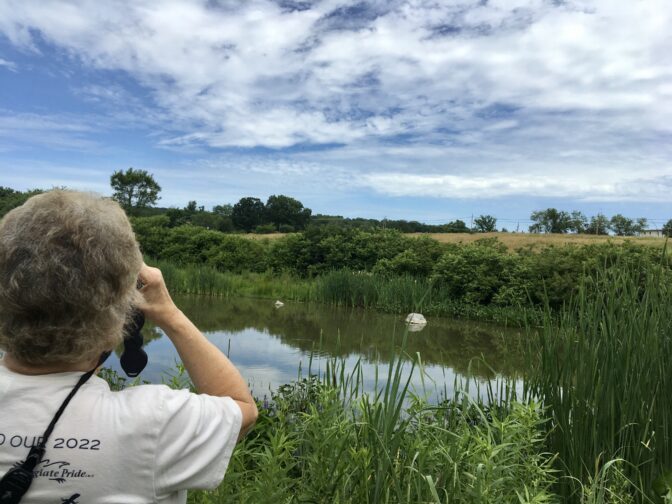 Deb Grove searches for birds at the Old Crow Wetland in Smithfield Township, Huntingdon County. The wetland is considered a prime spot for bird watching, in addition to providing habitat for other wildlife. Grove of Huntingdon County is one of those concerned about the potential impact of a convenience store and roadhouse proposed by Rutter on the wetland ecosystem.

Birdwatchers have counted about 220 species of birds here, including eight or nine which are endangered in Pennsylvania, as well as seeing other wildlife like turtles and butterflies. The habitat is mixed with ponds and trees, milkweeds and cattails. It includes a pollinator garden and bat houses.

“The reason it’s so great is because there’s a really good intact ecosystem here, and it starts at the lowest level with tiny little microorganisms and so on that can live in water or around water or on plants,” said ornithology expert Greg Grove. “And birds are kind of up the food chain, or more accurately the food web. And they’re here only because everything works so well.

Greg Grove is retired from Penn State. He and Deb both ran the State College Bird Club and served in the Pennsylvania Society for Ornithology. He said a major concern is the possibility of runoff from the gas station, which is upstream from the wetlands.

“We just think the best-laid plans, or whatever, usually get lost somewhere at some point,” Grove said. “And it looks like there might be alternatives to installing a Rutter, but that’s what we have. There’s no replacement – the wetland, the marsh.

Visitors to the site can watch birds and other wildlife from the pavilion, or walk along the trails around the wetlands.

“I’ve heard or seen 21 birds since we got here,” Deb Grove said, recording her entries. “And you can hear a house wren around here.”

And then Deb Grove and Doug Wentzel spot kingbirds.

“That electric sound. Isn’t it wonderful? said Wentzel, who lives at McAlevys Fort in Huntingdon County and is president of the State College Bird Club and program director at Shaver’s Creek Environmental Center. He said the wetland is an outdoor classroom – literally.

“Usually in the fall, watching the monarchs go by, it’s a stopping point, because of the common milkweed and the flowering plants here,” he said. “So not just for birds, but for insects, dragonflies, painted turtles, frogs, it’s still a wildlife oasis. It would be a real shame to lose that to a roadhouse. 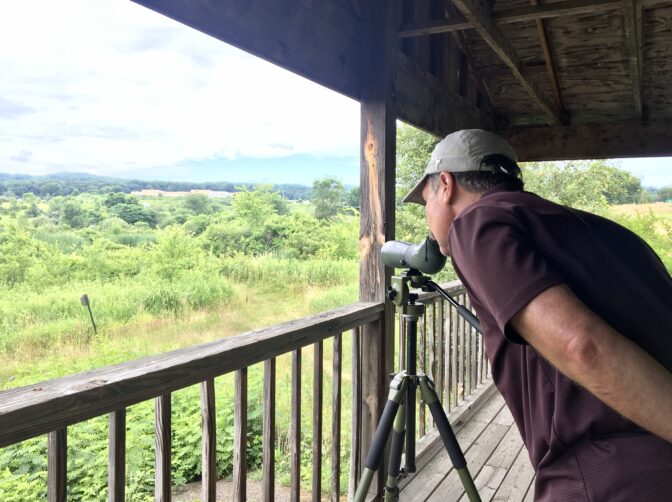 Doug Wentzel, president of the State College Bird Club and resident of McAlevys Fort in Huntingdon County, poses in front of a telescope at the Old Crow Wetland, a prime spot for birdwatching.

The state Department of Environmental Protection reviewed plans for Rutter’s National Stormwater or Pollutant Discharge Disposal System, responding with a list of deficiencies. The company has until September 12 to respond. A DEP spokesperson said the DEP and the Huntingdon County Conservation District will review any response, and if significant deficiencies remain unresolved, the application will move to what is called a thorough review”.

It is early in the morning and tourists are looking over a wooden balcony to observe a small bird. The crescent-headed antpitta, a tennis ball-sized bird with large eyes and a small beak, hops among the ferns and leaves of the forest floor. Bird watchers love this species because it is very difficult to spot, […]

Feeding frenzy in an Oregon coastal town could mean the arrival of humpback whales Posted 8/22/22 6:39 PM PST By the staff of the Oregon Coast Beach Connection (Seaside, Ore.) — Pelicans in the northern Oregon coastal town of Seaside are playing at the mouth of the Necanicum River and estuaries, according to local residents. […]