Better traffic, accessibility and amenities are potential changes that could occur in Wolf Trap National Park for the Performing Arts.

The Wolf Trap Foundation for the Performing Arts and National Park Service unveiled a proposed change to the general park management plan at a virtual public meeting on May 25.

“In general, the broad goal is to improve the visitor experience,” said Acting Wolf Trap National Park Superintendent Ken Bigley. “In keeping with the preservation mandate of the National Park Service, we want to preserve the natural beauty and character of this very special space… This is exactly where you come as members of the public. “

The upgrades will focus on improving equipment, accessibility, safety and security features; address long-documented site challenges, such as access to transportation, foot traffic, and stormwater management; treat deferred maintenance areas; improve the visitor experience and expand the possibilities of using the park throughout the year. 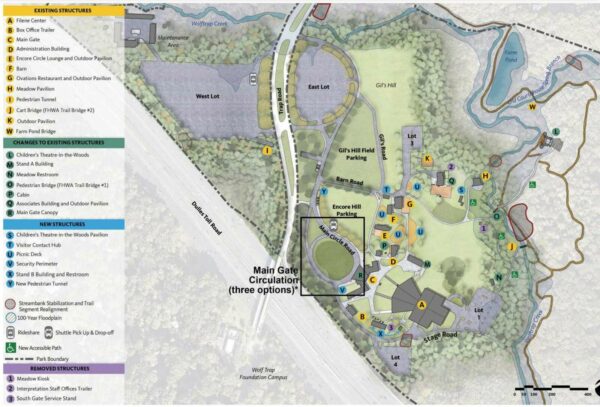 The approximately 130-acre park set on former farmland includes three outdoor sites: the Filene Center, the Children’s Theater-in-the-Woods and the Meadow Pavilion, each served by a collection of structures that could be removed, rehabilitated or improved. . Other structures could also be added.

The concession buildings in the Filene Center area are obsolete and could use improvement, according to the presentation. 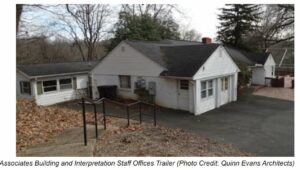 The Children’s Theater-in-the-Woods could benefit from the necessary support facilities, such as a space where parents can comfort their children. The establishment should also receive a pavilion.

The plan recommends rehabilitating a building to provide offices, a catering kitchen, toilets and a cabin to house the US park police and serve as a space for the park ushers.

The existing trailer offices would be eliminated.

Other additions include a security perimeter and a new pedestrian tunnel.

Architects are also interested in parking, traffic and traffic. The three options being considered all widen Main Circle Road to add a bypass for vehicles that need to access certain lots or parts of the park, while removing existing parking around Main Circle Road.

Option A would retain more trees than Option C, while Option B could incorporate a parking garage, the location of which has not been verified, according to the presentation.

Here is an illustration of the impact of each of the options on delivery:

During the meeting, some participants raised questions about parking and traffic and wondered about the cost of the projects and the planned sources of funding.

“What we have described here potentially has a huge financial impact,” said Arvind Manocha, President and CEO of the Wolf Trap Foundation. “We see them as a road map for many years to come. “

He said the foundation was willing to raise funds for specific projects and work with NPS and the arts community to make those changes.

“As long as funding is available through a public or private source, either would be great, both would be welcome, but not all or none would be expected to fall into one category.” , did he declare.

“It would be a challenge,” he said. “Even though all of these projects can’t be funded at the same time – they probably wouldn’t – what we decided early on was that we wanted to have a big picture of what the long-term vision would be. , rather evaluate a number of these options on an ad hoc basis.

Wolf Trap is currently in the middle of a privately funded renovation project to replace several temporary tents with permanent pavilions, a change intended to support longer use of the facilities throughout the year. The park is also gearing up for its 50th anniversary season, which kicks off on June 18 with “The Anonymous Lover” in concert.

Photos via the National Parks Service