The majority of asylum seekers in Japan have their applications rejected by the government, leaving them with nowhere to go and no way to earn a living. Many turn to refugee shelters run by humanitarian NGOs for help while their cases are resolved. We follow Oikawa Izumi, a Japanese university student who assists residents of a refugee center in Kamakura.

Nestled among the temples and shrines of the ancient capital of Kamakura in Kanagawa Prefecture is the Arrupe Refugee Center. Established as an NPO in 2020, the establishment, which can accommodate up to 30 people, occupies a former Jesuit retirement home surrounded by trees and other green spaces.

Worldwide, more than 100 million people have fled their homes to escape armed conflict and persecution, both religious and political. Many seek refuge in neighboring countries, while others hope to find protection in advanced countries. The Japanese tend to view this flood of refugees as a distant problem, but each year hundreds of asylum seekers arrive on Japanese shores.

Those who come to Japan, however, have a slim chance of having their requests granted. While Western countries have opened their borders to large numbers of displaced people, Japan, which signed the UN Refugee Convention in 1981, lags far behind other signatory countries when it comes to hosting refugees. , recognizing only a fraction of the asylum applications it receives.

People who are initially denied refugee status are usually granted provisional release when they appeal their claim. However, without the legal right to reside in Japan, their existence is precarious. They cannot look for work, have no access to health insurance and social services, and face the constant fear of long-term incarceration or even deportation. Prevented from providing for their most basic needs, many are forced to live on the streets. Their plight has garnered widespread attention in Japan and abroad, with the Japanese government being criticized for its inhumane immigration policies.

Facilities such as the Arrupe Refugee Center play a vital role in the lives of asylum seekers in Japan. Since its opening, it has welcomed 31 refugees from 16 different countries. In April this year, it welcomed its new residents, a Ukrainian couple who fled war in their country. Among the volunteers who support the needs of people living at the center, including helping them to become aware of their precarious situation, is Oikawa Izumi, originally from Kamakura.

Oikawa entered Sophia University in 2018 with ambitions to one day work overseas to help people in need. Eager to gain real-world experience, she planned to volunteer at the 2020 Tokyo Olympics and participate in a Japanese teaching project in Indonesia.

Shortly after starting her studies, the arrival of the COVID-19 pandemic forced her to put her dreams on hold. “I was ready to step out into the world, only to find that I couldn’t leave my house,” Oikawa says. His hopes of volunteering at the Olympics were dashed when the games were postponed and an opportunity to travel to Indonesia with an aid group fell through when global coronavirus cases soared.

Rather than give up, Oikawa turned her attention to local volunteer work. She heard about the new refugee center in Arrupe from an acquaintance Urushibara Hiroshi, who heads the NGO Japan Lay Missionary Movement. Oikawa admires Urushibara, whose passion for humanitarian work has taken him across Japan and around the world. “He makes a lot of sacrifices in his life, but he gets so much satisfaction from helping people in need,” she says. “It’s something I aspire to.” 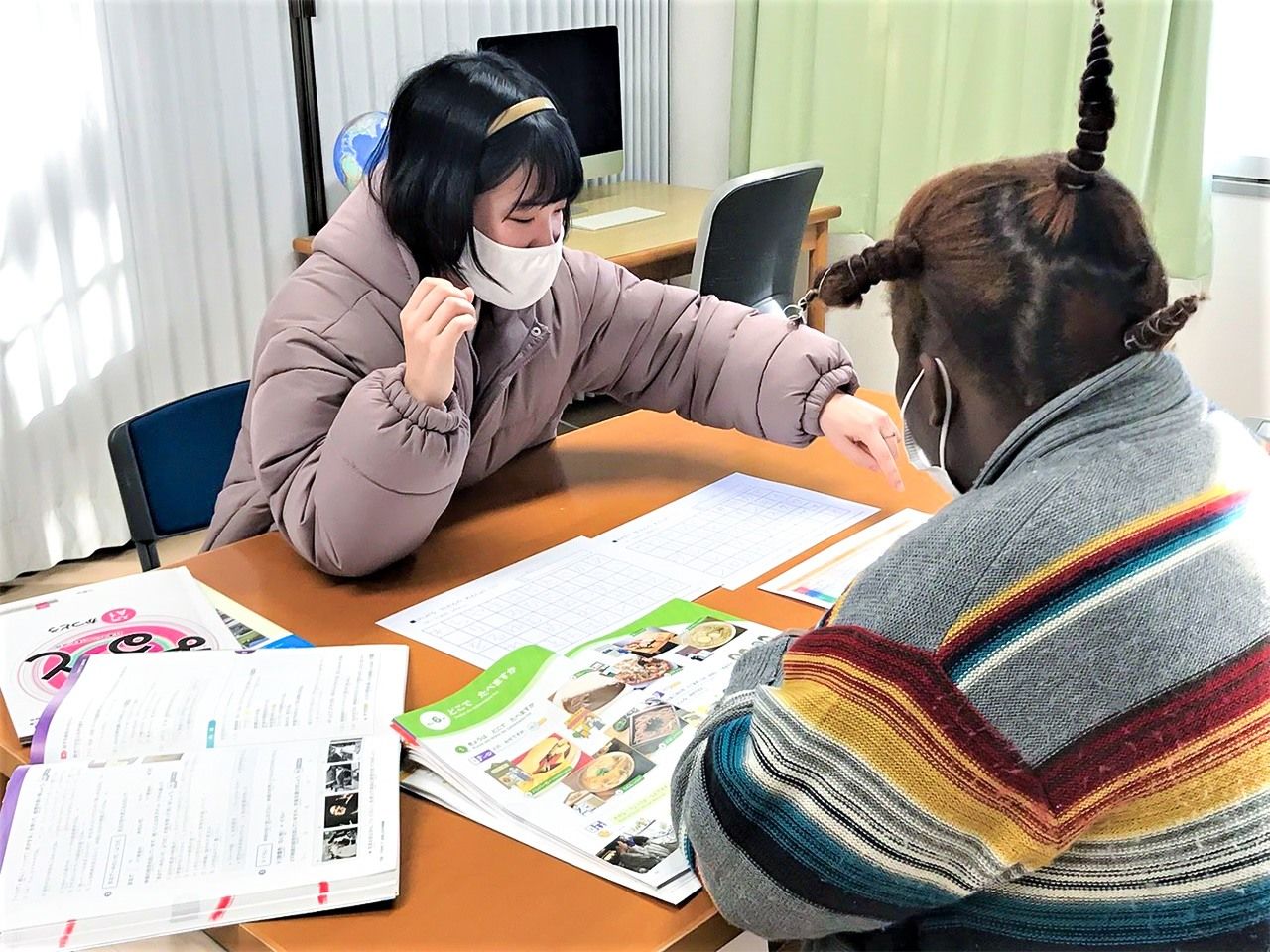 Oikawa on her first day at the refugee center teaches Japanese to a resident from Africa. She was introduced to the shelter by NGO chief Urushibara Hiroshi, who helped guide the facility through the difficult process of applying for funding.

The residents of the facility have suffered trauma in their home country, and their precarious status in Japan weighs heavily on their emotional well-being. Oikawa notes that many prefer to hole up in their rooms rather than interacting with others at the center. Oikawa has organized events, including making chirashizushi and Japanese-style curry and planning trips outside the facility to a nearby zoo and tourist spot in Enoshima, in an effort to give residents a brief respite from their worries. “Anything I can do to help brighten their lives.”

Oikawa says she has carte blanche to plan new activities. “An older facility would have a number of established programs, but Arrupe allows volunteers to come up with their own events,” she explains. “It was a great opportunity to learn and develop vital skills.”

Along with planning and managing activities, Oikawa draws attention to the center’s aid work on social media and gives presentations at seminars, including an online event held on June 20, 2021, in l honoring World Refugee Day. 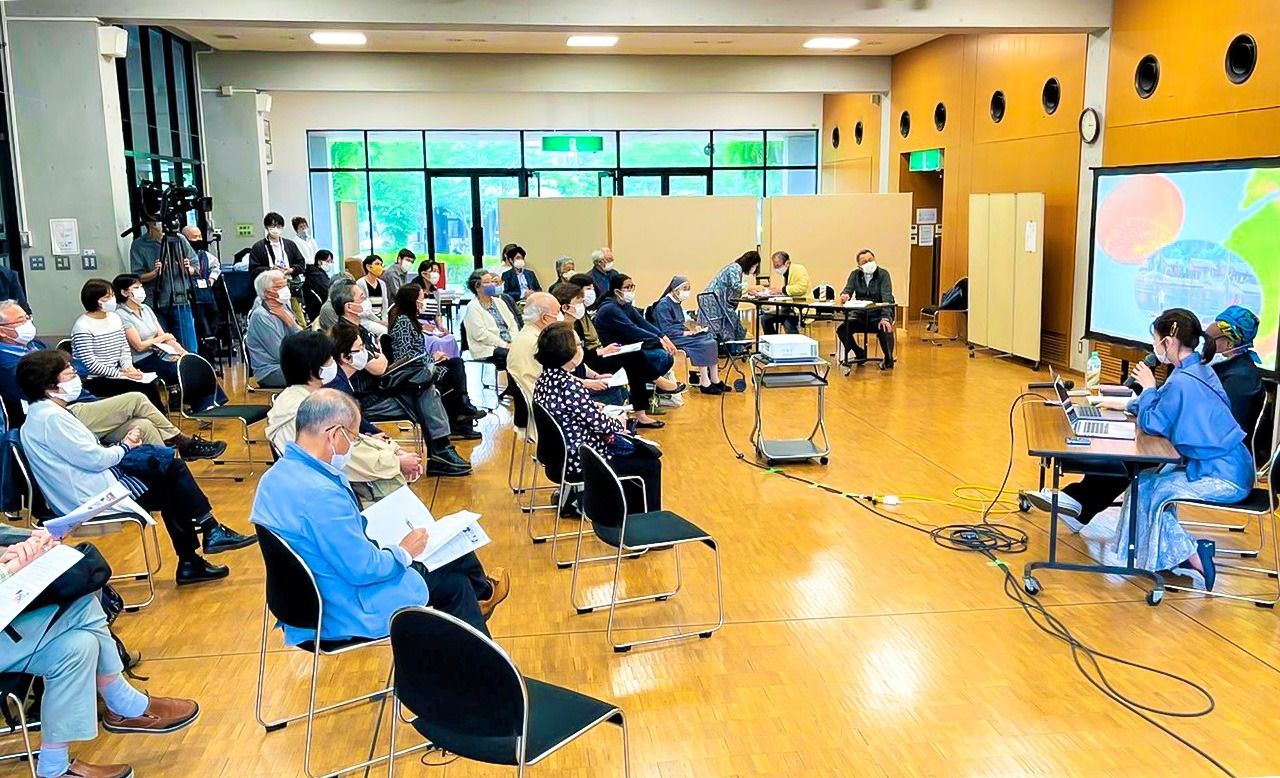 Oikawa, right, speaks at a seminar about his other work at Arrupe.

Its main objective, however, is to meet the various daily needs of the people in the shelter. She began studying for her nursing license and is often tasked with caring for residents who fall ill. However, she can also be found patiently explaining how to use a smartphone, and she always has time for the two children who live at the center.

Oikawa says she had to learn to deal with tense moments, which is not uncommon considering what the residents of the shelter endure. A misunderstanding can lead to terse words or other actions, with Oikawa’s youth making her an easy target. During tense moments, she focuses on understanding the person’s situation rather than letting her emotions get the better of her.

Making a difference in the lives of refugees

Oikawa remembers having regular run-ins with a resident of the Africa shelter. “She was quick to praise the other staff, but she was very critical of me,” she says. “She often ignored me when I spoke to her. It was very stressful. »

Things turned 180 degrees, however, when Oikawa began caring for another resident’s five-year-old daughter who was in hospital after giving birth to her second child. Oikawa says the child was a handful. “The mother didn’t discipline the daughter much.” Reading the situation, the woman Oikawa was having trouble with took it upon herself to set some rules, and after a stern talk, the girl became more manageable. It helped that the wife and mother were from the same country. “The woman later confided in me that part of her behavior towards me stemmed from the stress of watching the girl go crazy. Knowing that changed my view of her and we got on well after that. 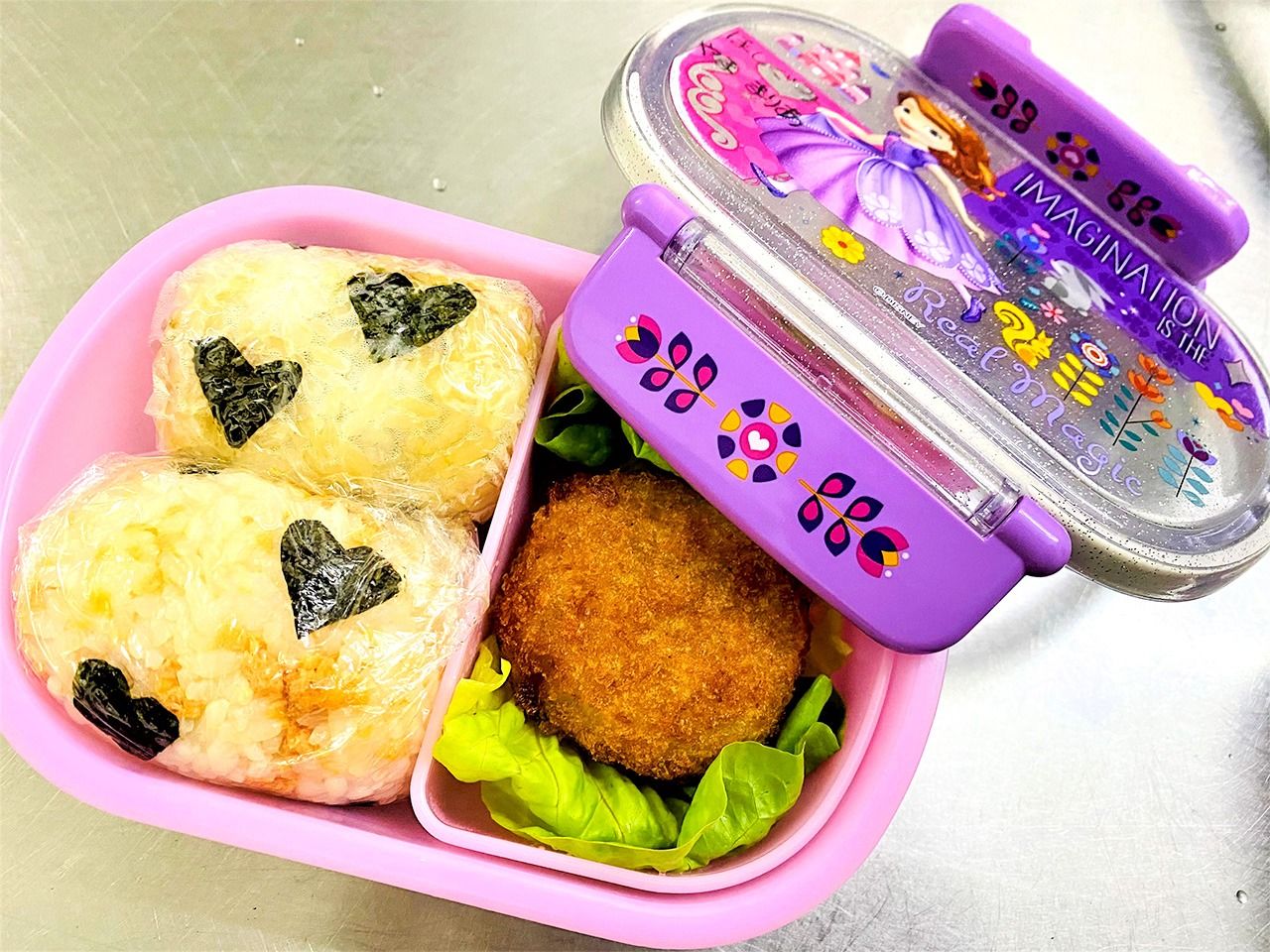 Oikawa cared for a resident’s young daughter for 10 straight days while the mother was in the hospital, including doing the bentō. 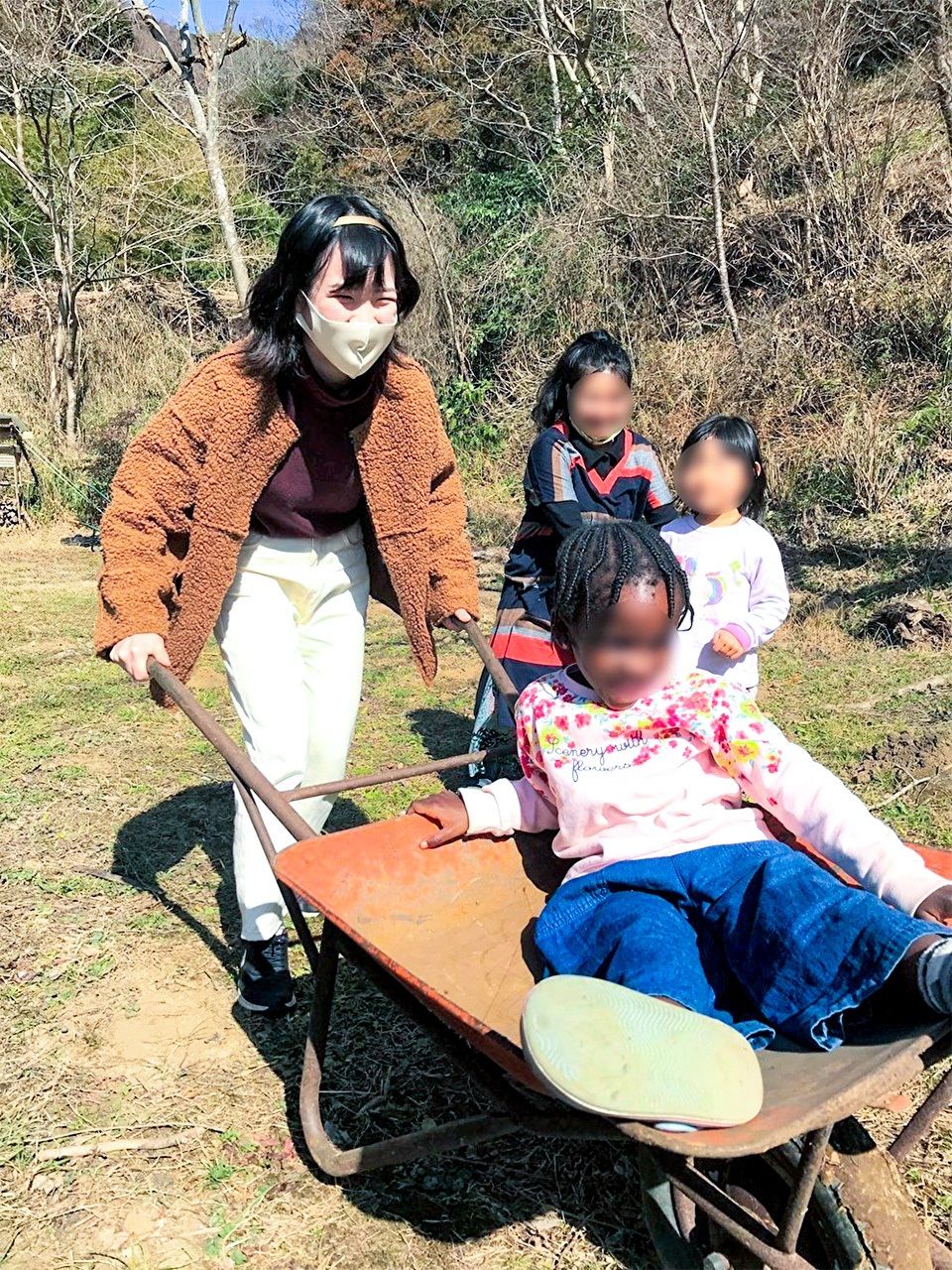 Oikawa plays with the daughter of a resident of Arrupe Refugee Center.

Bringing help where it’s needed most

After a two-year wait, Oikawa was finally able to travel to Indonesia at the end of 2021 as part of a project to teach Japanese in the country. To her surprise, she quickly adapted to the different culture and environment, which she attributes to her experience at Arrupe Refugee Center. “It was like discovering the world in my own backyard,” she says. “I was able to acquire basic skills that will serve me in my career.”

However, her time at the shelter gave her something more: an understanding of the plight of refugees. She admits that while she can cheer up the residents for a while, she has no way of changing their fundamental situation. “People applying for refugee status ask me, for example, how they can find work to support their families, but I can’t do anything for them. The Japanese legal system does not allow this, which is my responsibility as a citizen. She says that in addition to providing aid, it is essential to campaign for Japan’s immigration system to change so that asylum seekers in the country can live freely.

Oikawa, now in her fifth year of college, has a job with an international aid organization starting next spring. The global refugee crisis will only worsen in the context of increasing armed conflicts and other conflicts in the regions of the world. Now more than ever, young volunteers like Oikawa are needed on the front lines of relief efforts.

(Originally published in Japanese. Banner photo: Arrupe Refugee Center volunteer Oikawa Izumi, center, wears traditional Congolese clothing and performs a Myanmar dance with residents during an event at the shelter. All photos courtesy of Oikawa Izumi. Some photos have been edited to protect the identity of individuals.)

A car parked in an Italian town had become a landmark, having been a staple on the street as early as 1974. Parked near a local newsstand, it has become an icon and even a tourist attraction. After 47 long years, the vehicle has finally been towed by the local authorities, reports Initiated. The car […]

In the less visited northern unit of Theodore Roosevelt National Park, solitude and sites to see

On a perfect June afternoon, visitors to the northern unit of Theodore Roosevelt National Park will see herds of bison roaming free, fearful flocks of mule deer, countless prairie dogs and dozens of wild turkeys cross the river. route at will. They will encounter geological anomalies that span millions of years and meandering views of […]

Firefighting crews bring the Chilako blaze and Cutoff Creek blaze under control amid multiple wildfires in the jurisdiction of the Prince George Fire Center Lightning from the storm that hit the city early Saturday morning sparked at least five new wildfires between Prince George and McBride, while humans are believed to have caused at least […]