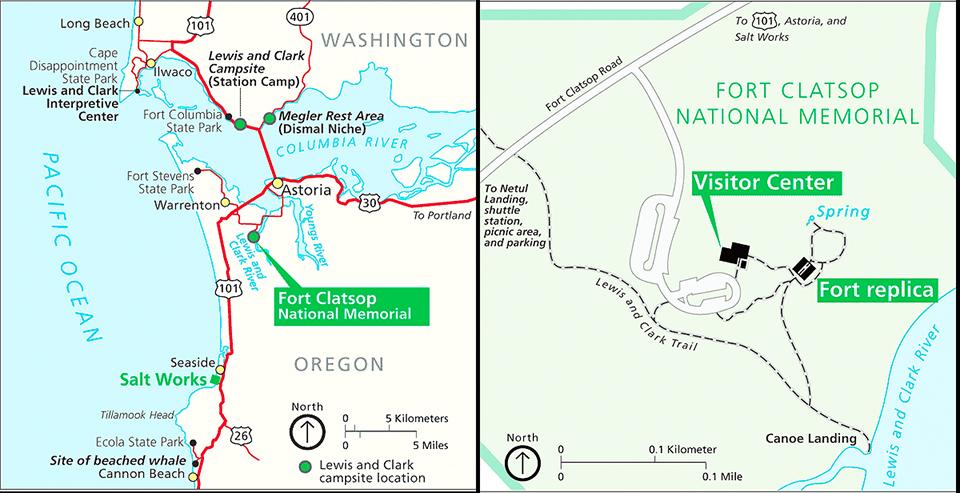 I had discovered Fort Clatsop and Lewis and Clark National Historical Park by looking at a Google Map display of Ilwaco, Washington and Astoria, Oregon. I knew I would be in this general area in early December 2021 while following the Pacific Northwest portion of the Lewis and Clark National Historic Trail (you’ll read my photo expeditions in future posts) and figured that out a visit might be worth it. I should note that while Fort Clatsop is not all there is in this National Historic Park, I was under time constraints so I only explored the fort and its immediate surroundings. This is the subject of this column, including a bit of history as well as sample images that you can capture on your own during a visit to this little fort next to the Lewis and Clark River ( aka the Netul River) in Oregon.

It is one thing to read a book about historic buildings and sites, but quite another to see for yourself physically where these people of the past spent their days, the terrain they have trod and where they are. environment in which they lived. Fort Clatsop was the winter camp for the Corps of Discovery, made up of 33 Lewis and Clark personnel, from December 1805 to March 1806. If you’ve ever visited the coastal landscapes of the Pacific Northwest in winter or spring, you’ll have a great time. idea of ​​the seemingly constant cold pouring rain and stormy weather experienced by the members of the expedition. It was not a Four Seasons Resort. It was built in wet and cold circumstances with an occasional clear and dry day or two. Fleas and mosquitoes besieged them, they were often sick, and no glass for the windows created humid, drafty living conditions in small rooms during this winter stay without Gore-Tex, fleece , rain boots or any other 21st century luxury to keep them comfortable. At one point during their stay, Meriwether Lewis noticed, appreciated, and ultimately purchased bespoke conical rain hats constructed of tightly woven cedar bark and bear grass from the local Clatsops, a tribe of Native Americans speaking the Chinook living in villages. on the south shore of the Columbia River and south along the Pacific coast to Tillamook Head. These hats effectively drain rainwater and keep the head relatively dry.

During their stay in winter and early spring, Corps members would hunt, gather firewood, make salt by evaporating ocean water near present-day Seaside, and make tallow candles made from elk and deer fat, tanned hides for clothing and prepared for the day they would begin their journey home and back to civilization. They also wrote in their journals, copied these writings into other journals, and worked on maps, all by the light of campfires and tallow candles.

So, let’s think about how you might photograph the fort and the nearby landscape to give your viewers a sense of the place. As you approach the fort (a replica based on a drawing by William Clark as well as archaeological evidence) you will likely notice the small size of the fort. Certainly not as big as, say, the fort and surrounding buildings at Fort Laramie National Historic Site in Wyoming. Fort Clatsop was just large enough to house enlisted men, captains and civilians (including Sacagawea, her French-Canadian husband Toussaint Charbonneau and their young son Jean Baptiste), with a storage room for food and other stationery. 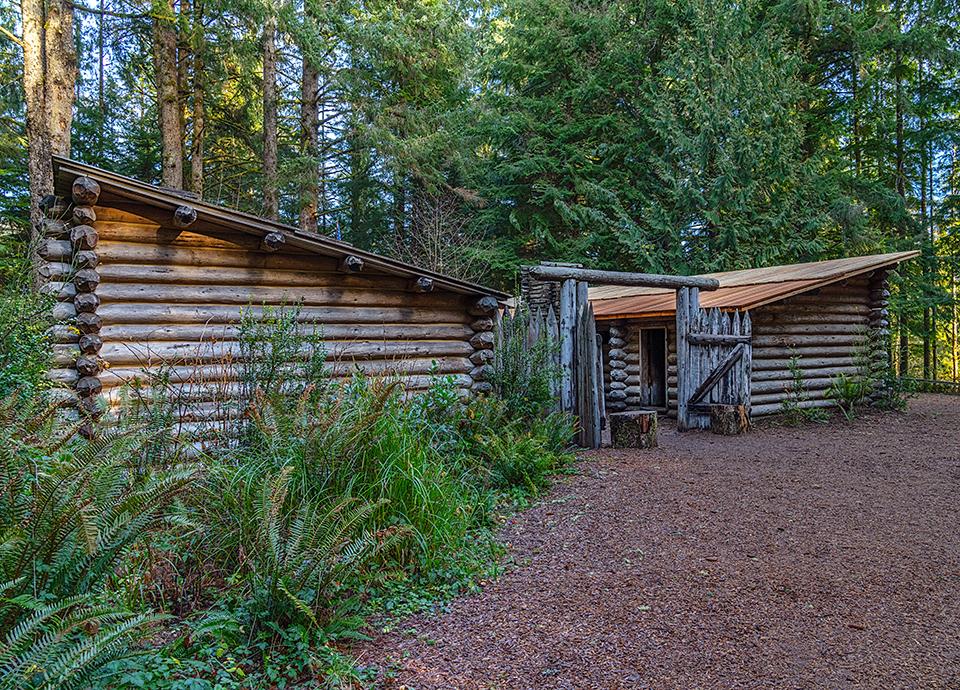 This small overall size works to the advantage of your wide angle lens, so consider how you want to frame your composition. Should you approach from an angle, like the image above, and / or use the open doors as natural frames like the image below? 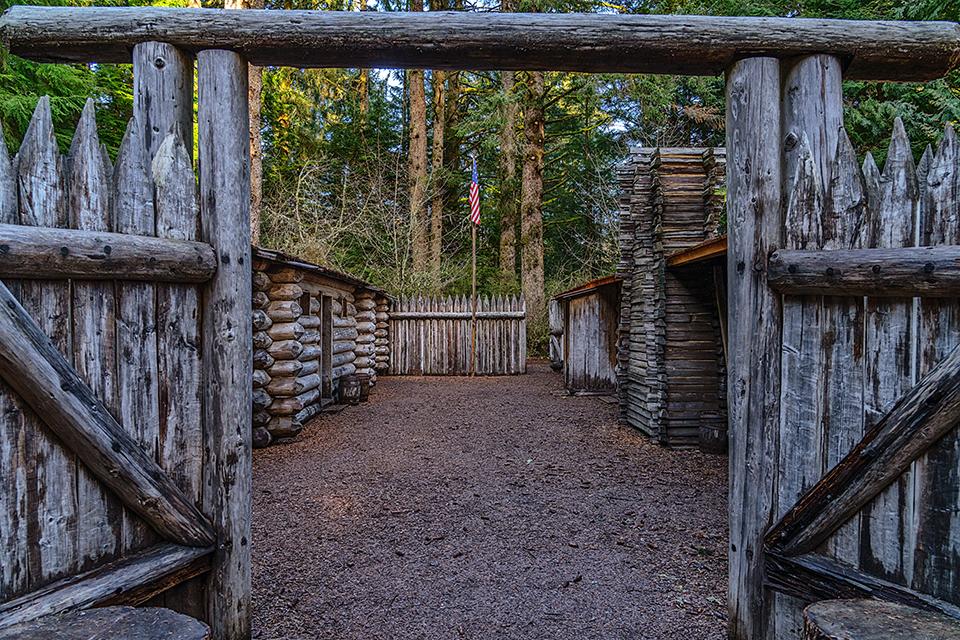 Even on a sunny day, the fort will be shaded by surrounding trees, so you will need to increase your ISO between 500 and 640 if you are holding your camera in your hand (which I did) to maintain a shutter speed fast enough for avoid camera shake blur. If you are using a tripod, you can keep the ISO between 160-250 while using a much slower shutter speed.

After capturing an overview of the fort, why not now try taking a photo of one of the interior rooms. They will be quite weak to downright dark, so if you don’t have a flash on your camera, you will need to increase the ISO and open your aperture as wide as possible. For the image above my ISO was 2000 with an aperture aperture of f4.0. 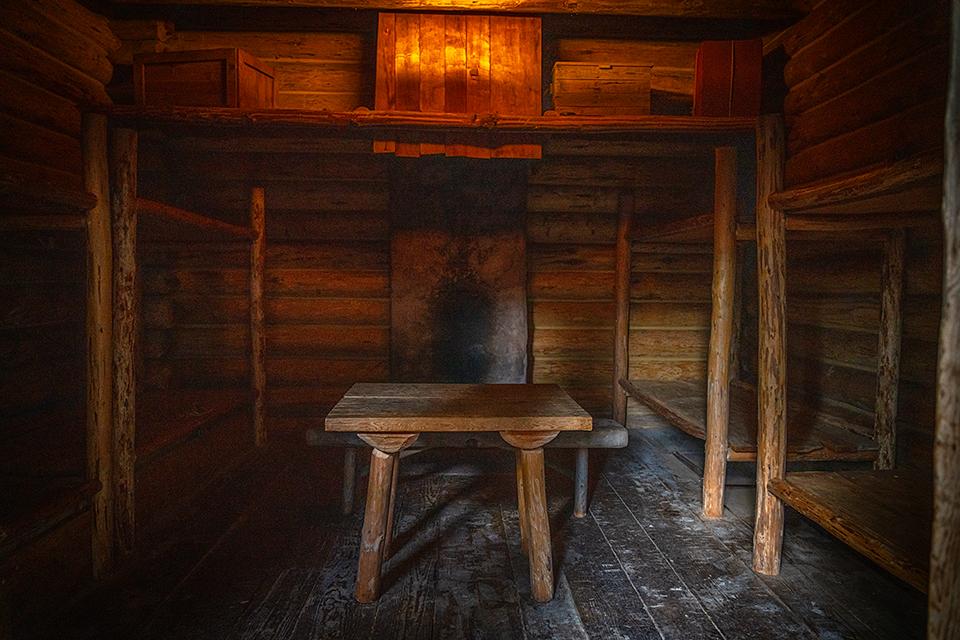 How would you like to frame your interior photo (s)? Do you want to stand in a corner of the room or take a photo looking through the door or maybe stay in the room looking out the door? Each of these suggestions requires not only thinking about framing your shot, but also selecting the right exposure settings. If you are holding your camera in your hand in low light conditions without a flash, keep this shutter speed around 1/30 – 1/40 and use the burst method by holding down the shutter button for several clicks. At least one photo should (hopefully) be nice and clear with no camera blur. Looking back, I wish I had brought my little flash with me.

These interior images can be noisy (grainy), so you will likely need to use noise reduction software like Noiseware from Imagenomic or DeNoise AI or ON1 NoNoise AI from Topaz Lab or any other noise reduction included with your noise reduction program. usual photo editing. 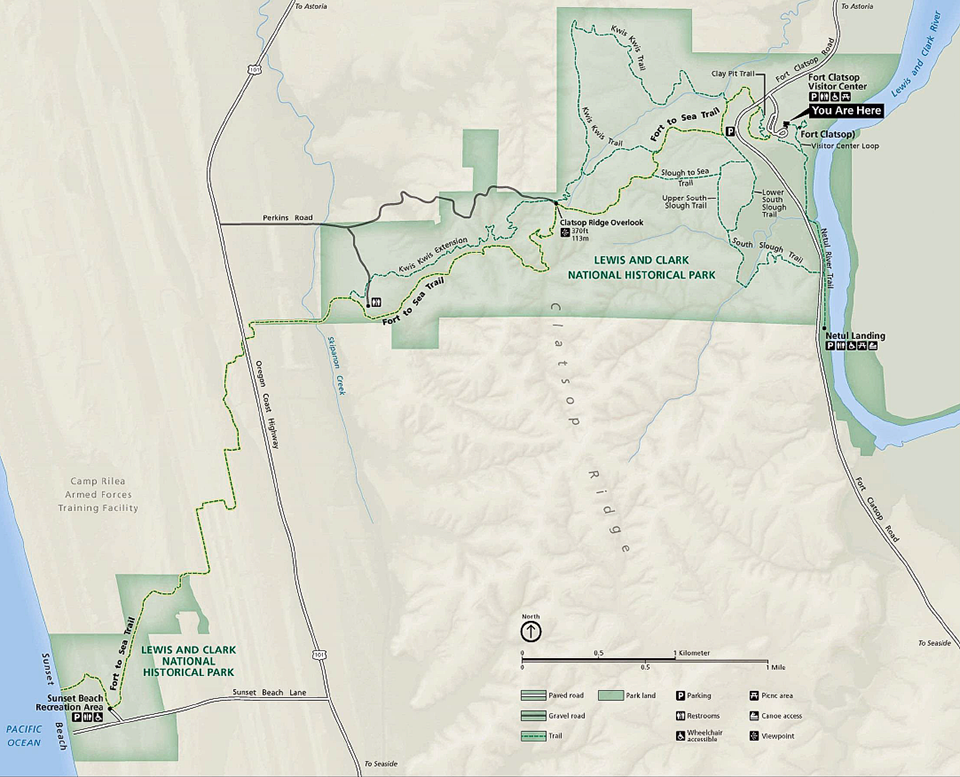 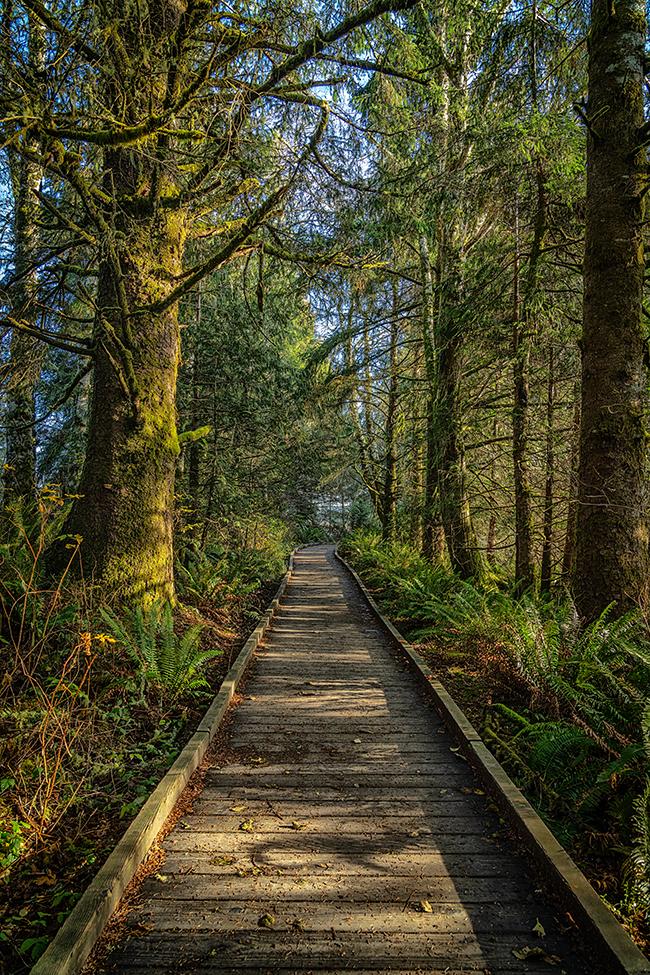 Among the 14.5 miles of trails in this national historic park is a trail from the fort to the Lewis and Clark River (known to locals as the Netul). After studying the fort, take some time and at least walk to this first view area along the promenade overlooking part of the river. While a wide-angle lens captures the entire scene, don’t forget to use your telephoto or telephoto setting as well. You might see a large woodpecker, a purple swallow, or even a river otter. 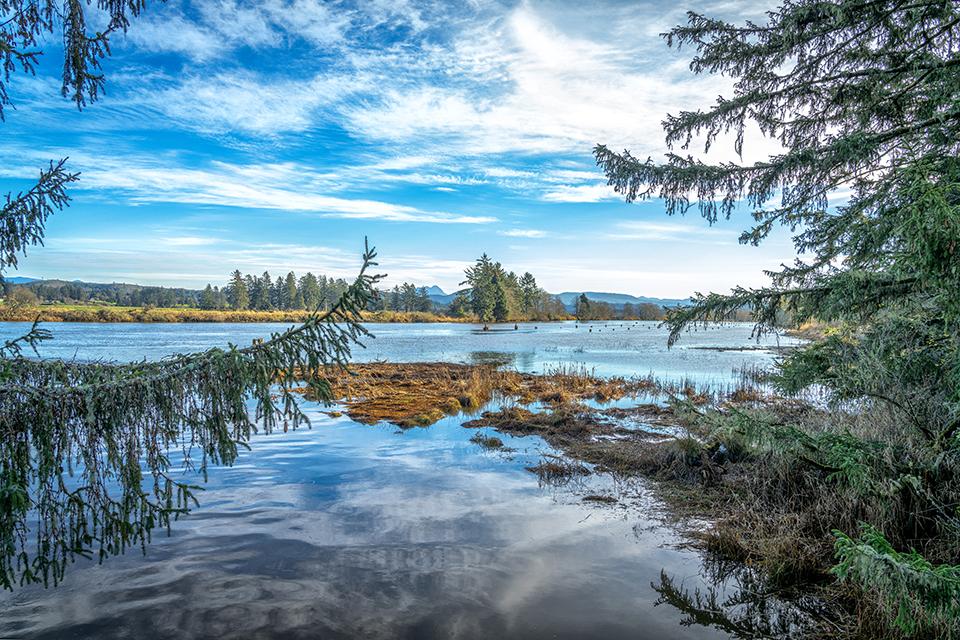 A view beyond the trees to the river, Lewis and Clark National Historical Park / Rebecca Latson

Fun Fact: According to the NPS educational plaque located in the viewing area where the above image was captured, “those distant poles or ‘stack’ (sic) you see coming out of the water in the image are from 80 year old Douglas firs used in log sorting and rafting. These log posts were driven 20 feet into the bottom of the river and could have a maximum length of 60 feet. “

If you visit this national historic park during the high season (summer months), you will see rangers dressed in deer skins offering “demonstrations such as flintlock shooting, skin tanning and candle making” . Demonstrations like these provide a glimpse into the daily life and tasks performed by the members of the expedition during those few (monotonous) months spent at the fort. Definitely take the time to walk around the visitor center museum and watch the film recounting the explorations of the Corps of Discovery. 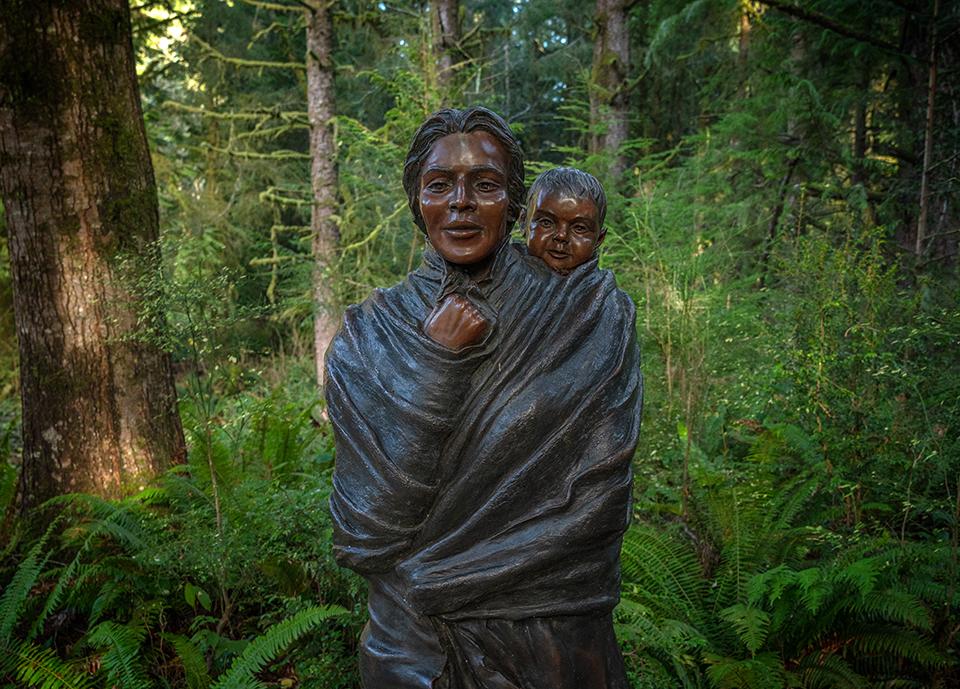 A statue of Sacagawea and her baby along the path to the fort, Lewis and Clark National Historical Park / Rebecca Latson

The National Park Service operates the Lewis and Clark National Historical Park, so you can use any national park pass you own in addition to several others. park pass . If you don’t have a pass, the cost is $ 10 / person, valid for seven days (ages 15 and under enter free).

EDMONTON – The largest campground in Jasper National Park will reopen on July 12, and campers will be able to book sites online starting Thursday. The Whistlers Campground is reopening after a $ 60 million renovation that spanned two summers. Parks Canada said in a statement that half of the approximately 800 sites will be […]

MEEKER I For a week in September, we had the joy of visiting our country’s oldest national park, Yellowstone, established in 1872. Previous tours have always been fun, but this one included a reunion with my siblings whom I rarely see. Some visitors think the famous “Old Faithful” geyser is the park’s best feature. Indeed, […]