Last week’s rain certainly contributed to the wildfire situation. However, thunderstorms might have hit a dry end or two that could burn for a long time before being detected, and may even go unnoticed. Many times I have gone through the woods hunting and found where a fire has been burning for a while and either extinguished itself or was extinguished by rain. It may happen this time, as we will have more rain this week when a cold front brings thunderstorms. There is no one in the observation towers anymore, but they can be seen by an airplane flying around the area.

Speaking of fire towers, today, Saturday September 3, is the annual lighting of the towers from 9 p.m. to 9:30 p.m. The local towers that will be illuminated are Stillwater, Rondaxe, Woodhull, Blue, Goodnow and Owls Head. I haven’t heard whether Wakely, Pillsbury or Snowy Mountains will be lit this year or not. The 90-Miler Canoe Classic will also take place next weekend, starting Friday morning (September 9) at Old Forge and ending on Flower Lake at Saranac Lake on Sunday, September 11.

A reminder that the Fourth Lake boat launch [in Inlet] will be closed from September 12 for repairs. There are other private boat ramps around the lake that can be used for a fee. The Fourth Lake boat launch has been in need of repairs for a few years now…maybe they’ll get it right this time. It was jammed up much of the summer with all the boat traffic on the Fulton Range.

Some parts of the country receive more precipitation in a 24-hour period than they normally receive year-round. Nine inches fell at the Dallas-Fort Worth airport in 24 hours. Texas has missed 8 to 12 inches of precipitation over the past six months. Much of that was erased in just a few hours. An additional three to six inches of precipitation is expected, with the possibility of more than 7 inches possible in some areas over the next five days from Texas to Mississippi. In Jackson, Mississippi, the Pearl River is expected to peak at 35.5 feet on Monday [September 5] with 100 to 150 households possibly impacted. 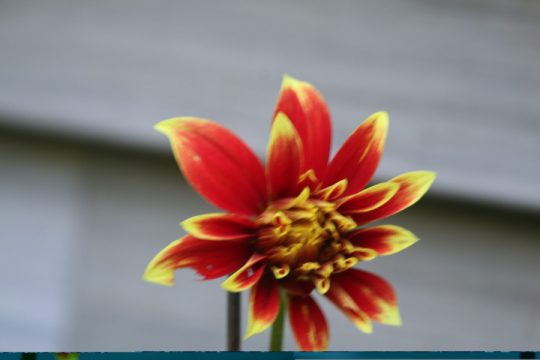 Last weekend was the weekend to report loons that had fishing lines on them. One was reported on Big Moose Lake in East Bay. I rode with Don Andrews on Sunday [August 28] and we took a canoe trip around the bay. We spoke to a few residents to ask if they had seen the Loon with a fishing line. One reported a loon preening and tearing off some of its summer feathers. We went to the end of the bay without seeing a single loon. Then passing by the creek we saw a single Loon, but there was no fishing line on that bird. Then we saw a couple fishing in the middle of the lake, and they had no fishing line either. Another pair appeared in front of the Higby Lodge property, and we couldn’t find a line on them, but one was banded.

There was a storm brewing up north so we headed back there before we got wet a second time that week. We were all loaded and six fishing loons appeared just outside the dock. One must have caught a fish that one of the others was looking for because when they all got there it was fight time. Two males (then a third male joining one of the others) all got up in penguin fight mode and came charging at each other. However, they flared up without colliding, like a false charge. Then they all went back to fishing together. One of these loons had feathers on the side of its head. Maybe the person [who reported the Loon being tangled in fishing line] I saw this and thought it was a decoy or take on this bird. Don got some great action shots and I saw the banded bird, but I still haven’t gotten the colors needed to identify this Loon. 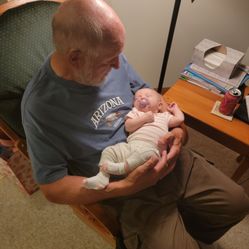 Some of the little songbirds have already gone south and others are getting new feathers for their flight. These birds are mostly silent during this time because they don’t move away from predators as quickly, so they are in silent running mode. Hummers and monarch butterflies will soon be on the move. They worked my big bee balm patches and the big cup plants with the bees. We won’t be rocking the hummers in Stillwater on Labor Day weekend.

My dahlias (grown from tubers donated to the Old Forge Garden Club by Harry Rissetto each spring) are doing well this summer. I hope others will have the same luck with theirs. The club will be holding its plant sale at the Old Forge Library on Friday, September 9 from 10 a.m. to noon. You can come up from the lakeside after watching the start of the 90-Miler Canoe Classic and get some plants and seeds for your garden.

Our granddaughter, Emily Peterson, and her husband, Kris, came over for the weekend with their new baby, Milly Jade, who is only six weeks old, and she had her first trip to the Adirondacks. It had been a long time since there had been a little baby in the house, and it was good that they could come and join us. Milly loved the air of the Adirondacks, and her eyes looked around at all the new things she saw, including us. Emily’s sister, Rachel, and her friend, Chris Tenae, also came for a few days. They have hiked most of the trails in the area and golfed in Inlet a few times. The whole team also went to see the entertainment in the city park on Saturday evening [August 27]. It was good times, good meals and good stories for a few days with part of the Rochester family.

A nice hike to Cascade Falls with water in August, but that’s another story. See you.

KEENE VALLEY & SARANAC LAKE, NY – Are you interested in bird watching but not sure where to start? Starting this summer, the Keene Valley Public Library and Saranac Lake Free Library are lending backpacks full of binoculars and field guides to give people a chance to try birding. The backpacks are part of the […]

Sesame Place San Diego, the brand’s first West Coast park, will transport guests to the neighborhood of Cookie Monster and Elmo when it opens Saturday in Chula Vista. SeaWorld Parks and Entertainment, the parent company of Sesame Place and SeaWorld San Diego, has overhauled the 17-acre property that previously operated as Aquatica San Diego. The […]