I am not a hiker. But, by a twist of fate (and marriage), I’m tied to quite a few very serious hikers, and they’ve all been through the Vermont woods this summer.

We met Snow and Snake Farm – the trail names of my husband’s cousin and her partner – for dinner shortly after crossing the Green Mountains on their northbound Appalachian Trail hike. 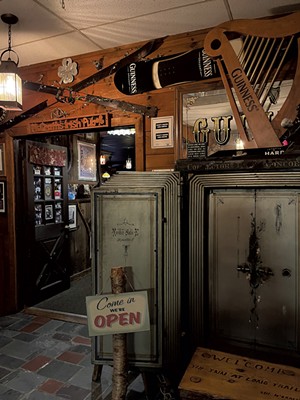 They were spending the night in Killington at the Long Trail Inn, a popular stop for hikers looking to rest and refuel. Less than a mile from the Route 4 trailhead, the hostel draws a steady stream of trail folks with its laundromat, discounts for hiking accommodations, and holding restocking packages.

Logistics aside, I was intrigued by a tip from my brother-in-law, who recently completed the Long Trail hike: he raved about the waterhole adjoining the hostel, McGrath’s Irish Pub. “They really know how to pour a Guinness,” he said, “with clover and all.”

We found Snow and Snake Farm at the pub, beers in hand. Naively thinking ahead for dinner, I asked what they were most looking forward to eating off trail. They immediately responded in unison raising their glasses: “Beer!

To make the most of their time in Vermont, they opted for local craft beers. But a note on the pub’s printed menu caught my eye: “First in Vermont to serve Guinness on tap.”

I ordered it and found the bartender’s two-part draft would fit anywhere, even the Guinness Storehouse in Dublin itself. After the first installment, as the three-quarter pint settled, I read the rest of the Inn’s history on the back of the menu, signed by owners Murray and Patty McGrath.

The place has been attracting hikers since 1923, when the predecessor of the inn across the street, a seasonal lodge, was built for the Green Mountain Club. When this building burned down in 1968, the news hit the headlines New York Times “like the loss of an important part of Vermont’s history,” the menu notes.

Kyran and Rosemary McGrath bought the current building, originally a ski lodge, in 1977. They added the pub – and Guinness.

The Guinness Academy, run by the Dublin warehouse, teaches a comprehensive six-step ritual for pouring, which should take 119.5 seconds from taking a branded drink to presenting a full pint. I didn’t look at my watch, but when I looked up my full pint was in front of me. Its creamy head tucked just above the rim, with the head of a cloverleaf traced on top.

We drank our perfect pints and several more, trying variations like the Vermont Half (splitting the Guinness with the Long Trail Ale) while listening to tales from our adventurous parents on the trail. The last 500 miles, from Vermont to Maine, was the part they looked forward to the most. 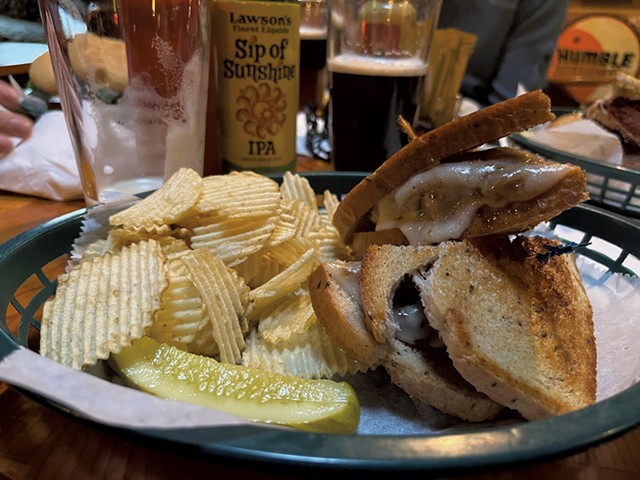 The pub dinner menu was a serious improvement on the basic tuna packets and sandwiches they had eaten, although they did pick up two types of cheddar immediately after driving through Vermont.

I opted for the “Paddy” Melt ($14), topped with Guinness Braised Onions and Guinness Mushroom Ketchup, to maximize my stout intake. I had only walked from the car park to the pub, but the melty cheese on the grilled burger looked like something I was craving after a few days in the woods.

Pints ​​empty, we took a family photo under a poster with the Barry crest — a small part of the Irish decor that adorns the walls of the pub — and said our goodbyes.

“Most fun stop on the whole trail,” said Snow.

I’m just passing by! | The Dartmouth

Every year, groups of Appalachian Trail hikers pass through downtown Hanover. by Meghan Powers | 07/16/21 3:10 am With the White Mountains as its backyard, Dartmouth has always provided a temporary home for passing hikers, whether they’re just hiking the area or trekking the entire Appalachian Trail. If your curiosity has ever been piqued by […]

Don’t use your face to cross cobwebs. Try these tips instead.

You’re on an early morning hiking trail, the sun is shining and all is peaceful…until you come across a trap of a crawling enemy. Spiders have been “trapping” hikers for, well, forever. Fortunately, there are several ways to avoid this problem. According to the National Park Service, you may not be able to avoid the […]

Two young men called for help around 6:20 pm on September 2 when they got stuck in a “dangerous place” at the popular Deep Cove Trail viewpoint. Two hikers on the closed Quarry Rock trail on Thursday learned a valuable lesson when they had to be rescued after slipping off the edge of the rock […]