As human development expands more and more around the world, very few large ecosystems remain relatively intact and uninterrupted by highways, cities, or other man-made barriers. One of the biggest exceptions is the Yellowstone region of the Yukon, or Y2Y, which stretches more than 2,000 miles (3,200 kilometers) northwest from Wyoming to Canada’s Yukon Territory.

For the past 30 years, conservationists have worked to connect this huge stretch of land as part of the Yellowstone to Yukon conservation initiative. Y2Y seeks to make room for wildlife in connected landscapes that give animals the ability to move across wide areas, whether they follow centuries-old migration patterns or react to a changing climate. 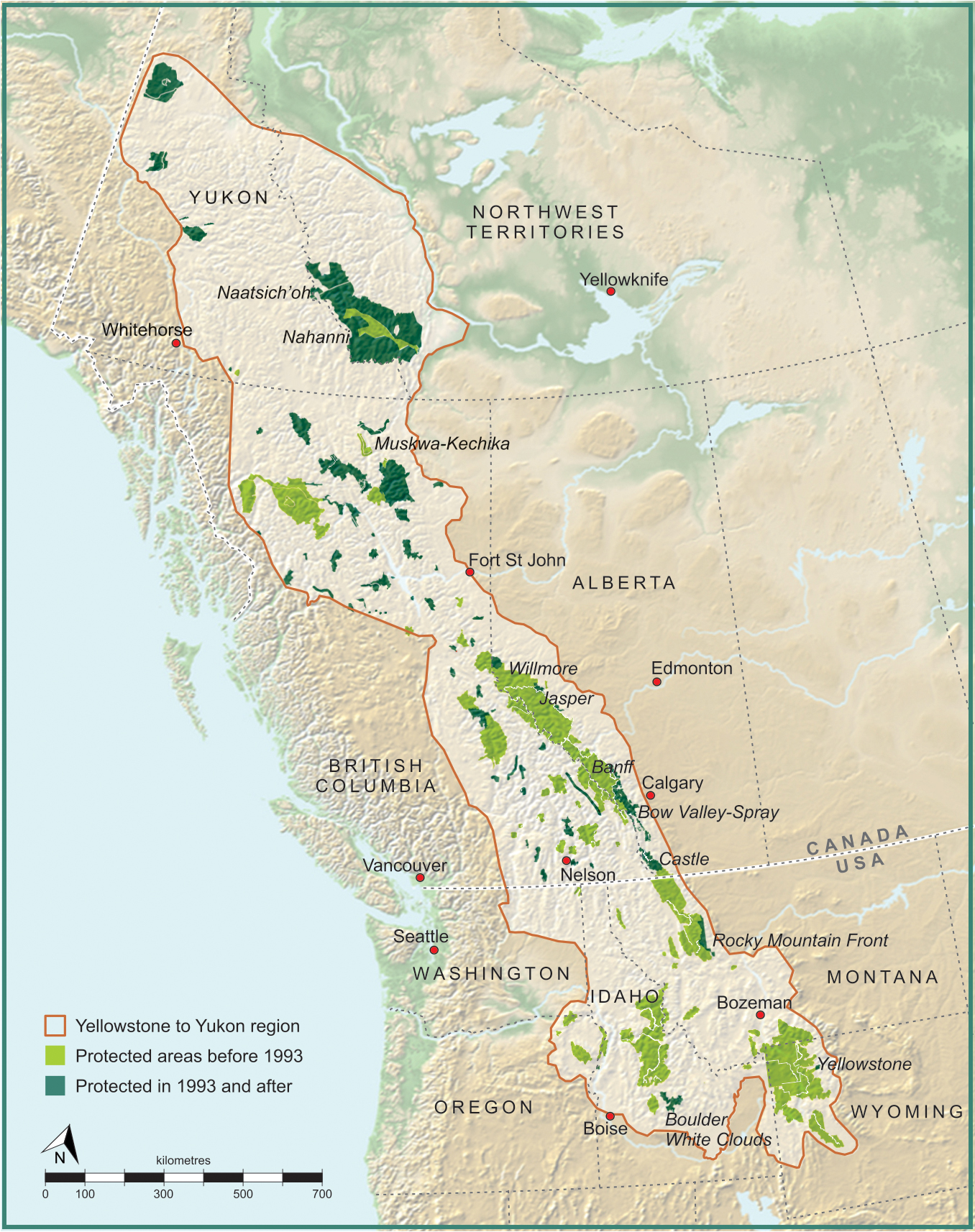 The Y2Y initiative envisions an interconnected system of wild lands and waters stretching from Yellowstone to the Yukon, harmonizing the needs of people and nature.
Yellowstone Yukon Conservation Initiative, CC BY-ND

Thanks to these efforts, grizzly bears are moving further into areas near Yellowstone National Park than 30 years ago. Animals roam 117 new wildlife crossings safely instead of getting killed. And Y2Y is consistently held up as an example of how great landscape conservation can work.

We study wildlife ecology and international conservation cooperation and have both served on the board of Y2Y. One of us, Charles Chester, is the US Chairman of the Y2Y Council, which advises the Y2Y Initiative. We have both worked for a long time to assess how large landscape conservation initiatives such as Y2Y are making a difference. Although the answer may be difficult to quantify, we have identified a number of ways that Y2Y has expanded the scale and effectiveness of conservation.

Inspired by a wolf

Y2Y was conceived by Canadian conservationist Harvey Locke in 1993 as nations sought ways to meet their commitments under the Convention on Biological Diversity. Signed by 150 nations at the Rio Earth Summit in 1992, this sprawling document addresses the conservation and sustainable use of natural resources, global equity and other goals related to the protection of life on earth. Earth.

Locke was inspired by the wanderings of a single wolf. On a rainy morning in 1991, Canadian biologist Paul Paquet captured and radio-collared “Pluie”, or “Rain” in French, near Banff National Park in the Canadian Rockies – the first time a scientist put a satellite transmitter collar on a wolf. . Over the next two years, researchers were amazed by Rain’s extensive movements over some 40,000 square miles (100,000 square kilometers) in Canada and the United States before she was killed by a trapper in British Columbia. British.

This solitary journey made it clear that conservationists need to think beyond creating individual protected areas, like parks and wildlife sanctuaries, for broad-spectrum species and consider larger landscapes. This approach is aligned with the principles of the emerging field of conservation biology – the science of protecting and restoring all life on Earth.

Yellowstone to Yukon conservation scientist Aerin Jacob explains why large mammals need the means to travel many miles to survive.

With several collaborators, we have worked to measure the conservation effects of Y2Y over the past five years. We used a counterfactual approach to compare trends in protected areas before and after the formation of Y2Y, and to compare Y2Y to regions without such broad visions in two regions of North America. Our analysis asked what would have happened without Y2Y by comparing the rates at which protected areas have expanded in the Y2Y region to other regions in North America without similar conservation visions.

We found compelling evidence that Y2Y has significantly increased wildlife protection in its region. From 1993 to 2018, habitat protection increased from 7.8% to 17.6% of the Y2Y region. Elsewhere in North America, protected areas grew by only 2.5% over the same period.

We also found that:

• Federally Endangered Grizzlies have expanded their range in the US portion of the Y2Y region.

• Private land conservation in the region has increased significantly; and

• The construction of at least 117 wildlife crossings has given the Y2Y region the most such structures in the world, helping wildlife move and making roads safer for people.

Y2Y is one of the first and largest landscape conservation initiatives in the world. Conservationists see him as a model of how conservation can work for all creatures, large and small.

In our view, perhaps Y2Y’s most significant achievement has been to broaden the conservation community’s understanding of how to do large landscape conservation effectively and equitably. Through connecting and partnering with hundreds of organizations and individuals working on targeted conservation projects across the region, it shows how people and wildlife can thrive together.

The future of Y2Y

There is still a lot to do. In an Internet-based economy, people can work from anywhere. Many travel to the Y2Y region for its natural beauty, abundant wildlife, and outdoor activities. Ironically, the success of Y2Y generates development concerns.

[Get the best of The Conversation, every weekend. Sign up for our weekly newsletter.]

Logging, mining and fossil fuel production also present major challenges for land protection. And climate change is altering conditions for people and wildlife across the Y2Y region. Y2Y and its partners have recognized this threat, but it remains to be seen how land conservation will play out in a heavily altered landscape.

A key Y2Y priority is to recognize the rights of indigenous groups, who are often evicted from lands they have managed for years when outside groups arrive and turn these sites into protected areas. This approach is known as fortress conservation because it aims to protect places by building walls around them.

The Y2Y movement recognized the rights of Indigenous groups early on and is working with them to establish several new Indigenous-led protected areas in the Y2Y region. These additions have been led by and will be co-managed with Indigenous governments.

In the fall of 2022, international negotiators will meet in Kunming, China for the second part of the 15th Conference of the Parties to the Convention on Biodiversity. One of the main objectives of this meeting is to finalize a draft strategic plan for global biodiversity conservation for the next decade or more.

The current plan calls for 30% of the world’s land and seas to be protected by 2030, based on the growing science of area-based conservation. Reaching this target would more than double the targets agreed by nations in 2011 – 17% for land, 10% for seas.

Such goals might once seem out of the question, but initiatives like Y2Y show that they are achievable. We believe Y2Y is the right scale for effective conservation on a changing planet.

This article is republished from The Conversation under a Creative Commons license. Read the original article.

African Parks in talks to expand into West Africa Non-profit group aims to conserve nature and support locals It is active in areas where Islamist militants pose a threat The lines between conservation and conflict can be blurred DAKAR, April 26 (Reuters) – When a dozen suspected Islamist militants from a neighboring country were seen […]

SYDNEY – Australian scientists are preparing to reintroduce platypuses to the country’s oldest national park after they disappeared from the region nearly 50 years ago, embarking on an ambitious plan to preserve the duck-billed wonders. Platypuses have not been seen in the country’s Royal National Park, about 20 miles south of Sydney, for decades. But […]

After a video emerged showing a wild party with sexy girls in skimpy outfits in Khao Yai National Park, the park chief has been relocated while a full investigation is carried out. The party took place on January 26 and appeared to violate both Covid-19 control laws and the National Parks Act. The event was […]